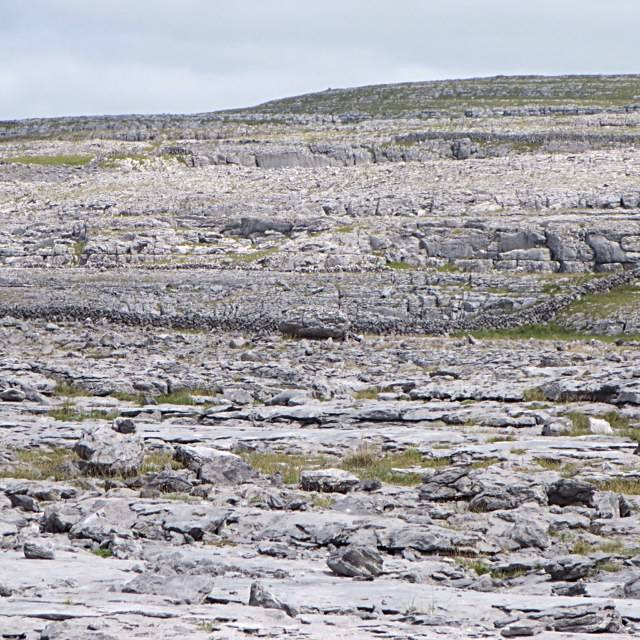 So I don't want to be a bummer but I feel the need to share the history of this place as it was never in any of the lessons I had in school. This area on the West Coast of Ireland is called "The Burren". In the mid-17th century there was a war in Ireland to overcome the tyranny of British rule. It was devastating to Ireland as approximately a third of the island's population was lost due to the war. Leading on the English side was Oliver Cromwell, who was quite a despicable person. Upon the Irish being defeated Cromwell instituted that all Irish people were only to speak English. The land taxes were so harsh that most people could not afford to keep their land. Many were forced into "work houses" which were basically slave labour houses all across Ireland. People would do back breaking work to be able to stay in the work house and for a bowl of porridge in the morning and one at night with a slice of bread. Just about every work house was burnt to the ground during "The Troubles" which occurred in the early 20th century. Many of the structural skeletons of the work houses can be found across the Irish countryside. Anybody caught speaking Irish, or supporting the resistance would be tried in "court" and were given one of two sentences. The first was what the English court referred to as "transportation" which was slavery. Over 300,000 Irish people many of whom were women and children would be sent over to the West Indies and the American colonies on slave ships during this time period, around 100,000 of them were children. Many of them died on those ships. The ones who survived were referred to as "livestock". The women slaves were usually forced to be sexual slaves and were quite often bred with African slaves to produce slaves of a lighter complexion than the African slaves, because those slaves were more desirable to the slave owners than the darker skinned slaves. The children were worked until they died in the fields. All the slaves were branded. Around the end of the 17th century the focus of the slave trade went to African slaves, who were more accustomed to the hot climates of the Southern U.S. and the West Indies and fared better in those climates. The combination of the hot climate and horrible work conditions were what caused many of the Irish slaves to die, mostly due to them not being used to the hot weather and the sun. Irish slaves besides being referred to as livestock would also be called "red legs" because of their skin's red hue due to sun over-exposure. The second sentence was called "hell or Connaught". People convicted with this sentence would be given the choice hell which meant death by hanging, or being exiled to the Connaught province which is where the area in the picture the Burren is located. It was Cromwell's distinct intention (he even had one of his generals scout out the most barren area on the island to exile these people) for the people exiled to this area to starve them to death. When his general/scout found the area he reported back "there isn't a tree to hang an Irishman from, no soil to bury one in, no water to drown one in, I have found the place". The landscape is barren, and harsh and many of the exiled starved to death there. Some were able to grow food by going to the sea and taking seaweed and putting it into holes and crevices in the rock which stretches for over 2000 acres, and planting food bearing plants within the seaweed. In the center of this photo is an egg-shaped rock which is actually quite a large boulder. It is somewhat hard to discern. It is a "fairy fort" which according to Irish beliefs at the time, which many of the island's people still believe in today is that it is a portal to the fairy world. The boulder is surrounded by a ring of grassy soil. While the fairy folk are known as the good people who would bring good luck and successful crops, to disturb a fairy fort brought the worst luck to the disturber. There are documented cases in Ireland of workers disturbing fairy forts to build on top of or for whatever other reasons and these workers dying soon there after or being stricken with serious ailments. Most people in Ireland refuse to have anything to do with disturbing a fairy fort.