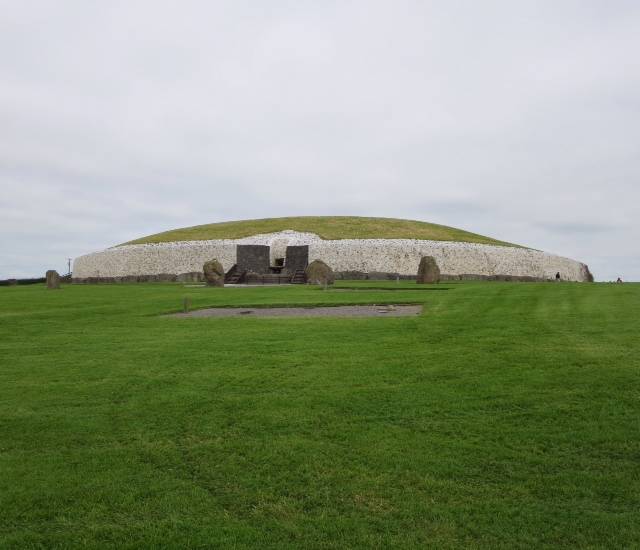 This structure is called Newgrange, or Brú na Bóinne in Irish. It is the largest of forty tomb structures in the Boyne River valley in Ireland. It was constructed about 3200 BC in the Neolithic period, which pre-dates Stonehenge and the Egyptian pyramids. It is 40 feet high by 250 feet in circumference. The darker area in the middle of the pictured structure is the entrance. People are able to go in, which I did. The entrance to the inner chamber is long and narrow, and has three smaller chambers adjacent to the small main chamber. In those three smaller chambers human remains were found when it was discovered. The most interesting part to me is that there is a small opening above the entrance doorway and on the Winter Solstice at sunrise a shaft of sunlight illuminates the inner chamber. There are many theories about the structure. That it was a tomb, that it may have been used for rituals. I think it was used for human sacrifice on the Winter Solstice as was common during those times to ensure that Spring crops and hunting would be bountiful, and then the sacrificial remains were kept in the structure till the next Winter Solstice. It remains a mystery. There are also some excellent petroglyphs at the site, which I love seeing. Most of the larger stones that make up the structure, of which there are hundreds had to be transported about 40 miles. These boulders are in the multiple ton weight range. Historians believe that some were transported on rafts on the Boyne River, but that most were rolled that distance on logs. It was before wheels started being used for transportation. It is pretty amazing to ponder the construction of this site.